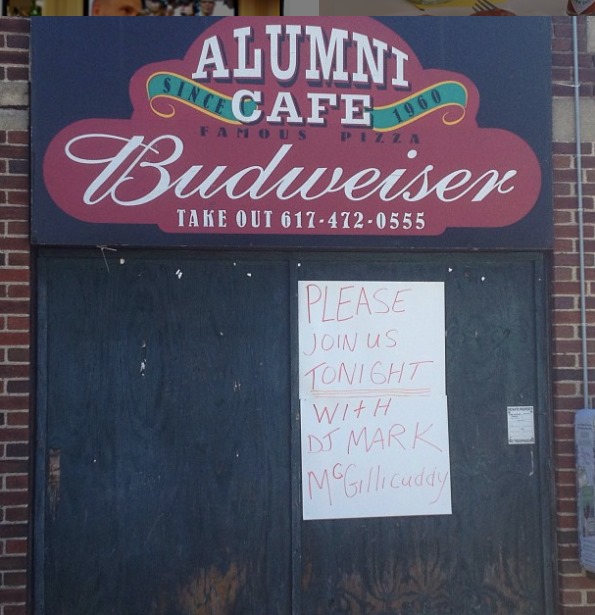 The Alumni Cafe was a local institution for more than 50 years in what's known around Boston as South Shore-style bar pizza.

(This story originally ran in August 2013 in the Boston Herald upon the closing of a long-time American culinary institution, the Alumni Cafe of Quincy, Mass. The Alumni was a beloved neighborhood watering hole that specialized in what’s known as South Shore bar pizza, a unique kind of pie found only in the working-class pubs, taverns and dive bars south of Boston. This story was the Alumni’s swan song. Reposting upon the news that a new Alumni will return to the historic community of Quincy here in 2020.)

The Alumni Café was an institution in the center of Wollaston, a classic dark neighborhood dive once famed for great South Shore-style bar pizza.

It served as a second home for generations of Quincy residents, welcoming everyone from boozy daytime tipplers to local families who would crowd into its vintage old 1960s-era booths for soda and pizza.

But that cozy old watering hole shut its doors Wednesday night, perhaps for the final time. A sign out front says “closed for renovations.” But the future of the bar has not been decided, according to several folks close to the situation.

I headed over for a few last frosty Buds and Stoli Cape Codders that night with my buddy Tim after rumors began to circulate on Facebook Wednesday afternoon that this was the end.

The Alumni, which opened in 1960, was the kind of gritty but comfy old place that felt as permanent as the colonial-era granite milestones that still dot Hancock Street.

When a long-time establishment like that closes, it’s something of a shock to the local community.

The name alone implied that the Alumni was a clubby spot for old pals. You went there with childhood friends for cold beer and strong drinks (no fancy cocktails here), maybe grab one of those tasty little pizzas with crispy burnt edges, play some Keno and, on a good night, catch Shawn Thornton – or Stan Jonathan back in the day – beat down a couple of Montreal Canadiens.

That end of the Alumni came largely without warning. Even Joe, the regular Wednesday night bartender, wasn’t sure of the situation. He said that he found out only when he arrived for work that this was his last night on the job.

The owner, Tom Bellotti, who is diabetic, has encountered some health issues that impacted his ability to run the bar. Bellotti is the son of former Massachusetts attorney general Francis Bellotti and the brother of Norfolk County sheriff Mike Bellotti.

So it’s a prominent and well-connected family, a fact which only served to accentuate the Alumni’s reputation as a social and political center for the city.

I worked with Tom back in the 1980s as a pizza cook and dishwasher at the old Chevy’s night club in Quincy Center, where he was a manager. But it had been more than 20 years since I talked to him with anything more than a passing hello.

Quincy city councilors and other local officials hung out at the Alumni on Wednesday nights, collecting in the far left corner of the bar, the spot typically reserved for Tommy’s friends and the most regular of regulars.

In classic hard-drinking Quincy holiday fashion, former North Quincy football players and their pals reunited at the Alumni at 8 a.m. on Thanksgiving, for a few early morning pops before the big game just down the street against Quincy High School. (The Alumni was most definitely a North Quincy bar, not a Quincy bar. There is a distinction.)

North Quincy football players have been known to march through the Alumni still in their uniforms, Thanksgiving trophy in tow, after a victory over Quincy in the big holiday showdown at Veterans’ Memorial Stadium.

Perhaps the best time to visit the Alumni was during the Quincy Christmas parade the Sunday after Thanksgiving. The biggest crowds along the parade route were always outside the Alumni. It would set up a street-side pizza take-out window and also pour beer into plastic cups, conveniently kept on top of the bar that day. Customers would slip back out onto the sidewalk for the festivities, however indiscrete.

My most memorable Alumni moment came on a lazy summer afternoon a year or two ago: I pulled up a stool next to two guys sitting at the corner of the bar. One guy looked like Mike Tyson had just used him as a punching bag. He was covered and dried blood, scrapes and bruises, yet appeared oblivious to his condition.

The bloody guy recanted his tale for me: he got a little too mouthy with the working girls at Zachary’s, a strip club in Mashpee, so the bouncers dragged him outside and beat him up. Then the cops roughed him up when they arrived.

Beat Up Guy had the wherewithal to admit that he “deserved the beating,” after which he needed a place to cool off. He should have gone to the hospital or at least home for a shower. Instead, they drove a good hour to the Alumni for a few more cocktails. He sat there as comfortable as if in his own home, his battered face adding a certain amount of rough-edged character to the Alumni that hot afternoon. I was so amused, I bought him a drink.

At its height, and not that long ago, the Alumni was one of the best places anywhere for classic South Shore-style bar pizza. We wrote about that pizza here in the Herald back in 2010.

My wife and I would pick up Alumni pizza maybe once or twice a month. So too, it seems, would half of Quincy. It was common to see folks walk out with a stack of six, eight or 10 pizzas, tightly wrapped in brown paper bags in the South Shore style.

But the end for the Alumni was presaged by a decline in recent years in the quality of that pizza.

If we wanted good bar pizza lately, we’d head to the Lynwood in Randolph or the Cape Cod Café, 30 minutes away in Brockton. The Alumni pie right up the street was no longer worth the little effort it took to get it.

We were not alone. I suspected the Alumni to be in trouble just with the eye and ear test: no longer did you see families walk out with stacks of pizza on Friday night and it had been a long time since you heard anyone rave about those once-famous Alumni pies.

The pizza business dried up, and with it I imagine liquor sales did, too.

My understanding is that Tommy Bellotti will talk about the fate of the bar with his family in the near future. It could re-open under the same or new ownership within months. The Alumni name may or may not return.

Here’s hoping, whatever the case, that they bring back that great old pizza and keep the civic spirit of the place alive.

The Alumni’s closure is a sign of the times at another level, too. Quincy still has more than its share of neighborly, no-frills old dive bars. But the area around the Alumni in Wollaston has changed dramatically in recent years, most notably with the influx of Asian eateries.

Just as the dark, nearly windowless old Alumni is closing a bright, shiny new watering hole is about to open across Hancock Street called The China Restaurant & Sports Bar. Koi Japanese Cuisine opened this summer on Beale Street, around the corner from the Alumni.

Another sign on Hancock Street near the Alumni announces that Hokkaido, also Japanese, is opening soon, in the same block as Pad Thai, a new Thai take-out joint. And tiny Fuji, a half-block from the Alumni, serves great sushi with ice-cold Sapporo. It is always packed.

Quincy Center was shut down yesterday for the August Moon Festival, a street fair celebration of the city’s Asian heritage.  Meanwhile, the billion-dollar makeover of that downtown, a mile or so down the road from the Alumni, is well underway, with the first phase called Merchant’s Row. The new development will bring with it a slew of new dining and drinking options.

The closing of the Alumni is a reminder that Quincy is changing rapidly, perhaps too rapidly for some.

The most Texas photo of all time