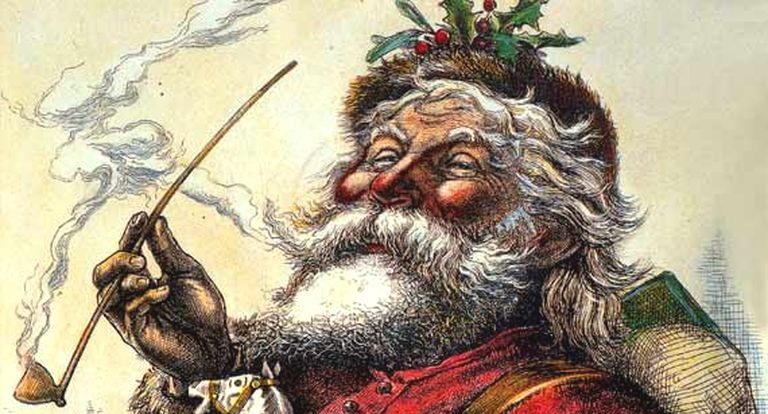 Children in Brockton, Mass. grow up believing Santa Claus visits their community first, thanks to the legend of a beloved local businessman named James Edgar.

Here’s the story of this real-life Santa-like figure whose legend lives on today.

The department store Santa is widely associated with world-famous Macy’s in New York City, which claims to have introduced Santa in 1862.

Credit the beloved cinematic classic “Miracle on 34th Street” and decades of relentless, hugely successful marketing by the retail landmark for the ironclad affiliation between Macy’s and Santa.

But Macy’s did NOT invent the department store Santa – at least not according to Santa Claus historian John Merian and the fine folks in Brockton, Mass. – a.k.a. “Christmastown, USA.”

Even Macy’s officials admit the error.

The first department store Santa instead appeared in 1890, courtesy of the beloved-in-Brockton Mr. Edgar, a Scottish immigrant who owned a shop bearing his name in downtown Brockton.

Inspired by the Civil War images of Santa Claus made famous by artist Thomas Nast, Edgar donned the costume of this festive figure, clad in red suit with snowy white beard, to greet guests at the door.

R.H. Macy, meanwhile, was a Massachusetts native (born on Nantucket) who opened his first Macy’s store in Haverhill, Mass. in 1851. His company eventually caught wind of the concept and adopted the department store Santa at Macy’s now-iconic Manhattan location sometime after 1890, not in the 1860s as it states on the company website.

That’s the version told by Merian, a Brockton businessman who is working on a book about the history of the jolly old elf and has devoted his life to preserving the legacy of James Edgar.

He has plenty of evidence to support his claim.

Merian notes that Macy’s officials over the years have admitted the company lifted the concept from Edgar – at least according to a 2008 interview with Macy’s historian Bob Rutan in the Boston Globe.

Edgar, the original department store Santa, remains a beloved figure in Brockton, where schoolchildren 130 years later sing a carol in his honor and grow up believing that Saint Nick visits kids in Brockton before anywhere else.

A plaque in downtown Brockton marks the site of the first department store Santa today. The city hosts an annual reading of “The Story of James Edgar” (much like other communities do “A Visit from Saint Nicholas”) and welcomes an annual Santa parade in Edgar’s honor each year, though that parade was cancelled this year for the obvious reason.

Edgar is a charter member of the International Santa Claus Hall of Fame, where he is officially recognized as the first department store Santa. Edmund Gwenn, who played the Macy’s Santa in “Miracle on 34th Street,” is also a charter member.

But it all begin in Brockton 130 years ago, thanks to a jolly old Scottish immigrant named James Edgar.