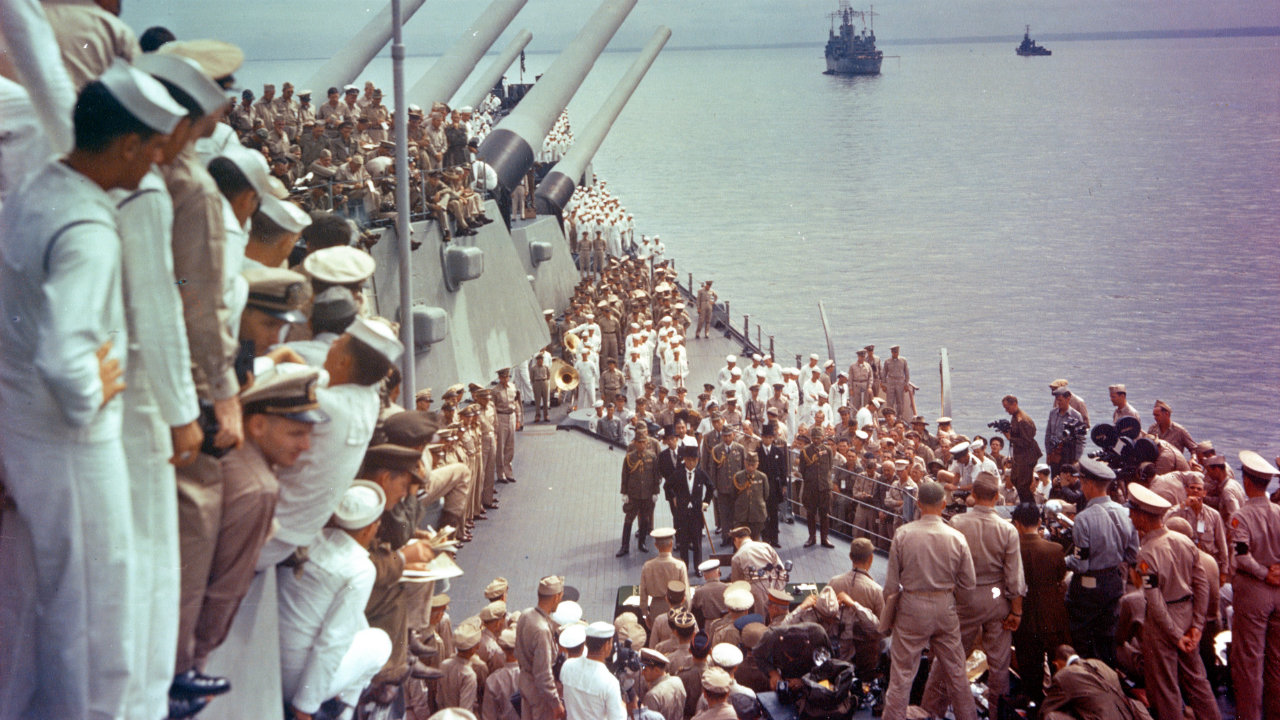 The formal surrender of Imperial Japan took place in the USS Missouri on Sept. 2, 1945. Among the Allied armada in Tokyo Bay that day were many warships built in my hometown of Quincy, Mass.

Imperial Japan formally surrendered to the United States and Allied forces in Tokyo Bay 75 years ago today – Sept. 2, 1945 – bringing World War II to an end and launching a new era of relative peace and prosperity for all of mankind.

The historic little city of Quincy, Mass. my hometown, was there to flex its industrial muscles during this incredible act in the human drama. Tokyo Bay was filled that day by a great air and sea armada meant to reinforce American might and impress upon Japanese leaders that surrender was their only option.

Many of those vessels that filled Tokyo Bay that day were built at Quincy’s Fore River Shipyard, a short distance from my childhood home. Its proximity to my house, just across Town River, is probably one reason I’m so obsessed with World War II today.

The shipyard closed in 1985, but we used to be able to tell time when the whistle signaling shift changes bellowed out across the city. People in Quincy and surrounding towns in the 1970s and 80s drove around in cars with bumper stickers that read “QuincyBuilt: The Best Thing You Can Say About a Ship.”

There was a certain amount of truth to this bit of boastful local pride.

After all, the Fore River Shipyard in hits heyday built some of the most storied vessels of World War II, including the aircraft carrier USS Lexington and the battleship USS Massachusetts.

Both powerful World War II vessels are still afloat today and both are registered National Historic Landmarks. The USS Lexington is a floating museum today in Corpus Christi, Texas, and the world’s oldest existing aircraft carrier. The USS Massachusetts is the centerpiece of Battleship Cove in Fall River, Mass.

For the most part, though, Quincy turned out an inordinately large number of heavy and light cruisers, which were much larger than destroyers but smaller than battleships. They rolled off the docks at a furious pace during World War II, when the shipyard was operated by Bethlehem Steel.

Among the many warships in Tokyo Bay for the surrender on Sept. 2, 1945 were 11 light and heavy cruisers. Eight of those 11 powerful cruisers were built right in my backyard in Quincy by my grandparents’ generation.

This is a brief story of each of those eight Quincy-built cruisers that prowled Tokyo Bay the day that World War II ended, 75 years ago today. All of them boasted distinctive careers of service in World War II, some among the greatest warships in American naval history.  We’re still quite proud of these ships and our little city’s oversized contributions to victory in World War II.

The Quincy-built Detroit enjoys a rather glorious distinction in the annals of the U.S. Navy. She was one of just two warships who survived the Japanese attack on Pearl Harbor in 1941 and was also present at the surrender of Japan in 1945 (the other was the battleship USS West Virginia).

Laid down in 1917, as the United States joined World War I, the Detroit was one of America’s oldest warships in World War II. She spent much of World War II defending the American homeland, helping drive Japanese forces from Alaska’s Aleutian Islands.

A legendary ship in the annals of the U.S. Navy, the San Diego fought in every major engagement of the Pacific War, earning 18 battles stars. Only the famous aircraft carrier USS Enterprise fought more often (20 battle stars).

In recognition of her battle service, the Quincy-built USS San Diego was given the honor of being the first warship to enter Tokyo Bay for the surrender of Japan. Quincy leading the way!

The San Juan fought throughout almost the entirety of the Pacific War, earning 13 battles stars, including service at the Battle of Savo Island, Iwo Jima, Okinawa and the “Great Marianas Turkey Shoot” which all but destroyed the last vestiges of Japanese air power. She aided the liberation of Vietnam and Hong Kong from Japanese occupation before entering Tokyo Bay in late August 1945.

The namesake of New England’s largest city, the USS Boston spent its entire World War II service in the Pacific, fighting in many of the most pivotal invasions and battles of the war, including Truk, Saipan, Guam and the Philippines Sea.

In February and March 1945, she was among the first ships to directly attack the Japanese home islands. The USS Boston was later converted into one of America’s first guided missile cruisers and served in Vietnam. She returned to Boston for a final salute in 1969 before being decommissioned then scrapped in 1975.

My city’s namesake enjoyed a brief but glorious history after replacing the first cruiser USS Quincy (CA39), sunk earlier in the war. Among other things, the USS Quincy helped lead the invasion of Normandy, taking out German positions on Utah Beach in June 1944.

Along the way, Roosevelt hosted Saudi King Abdul Aziz Ibin Saud aboard the Quincy on Valentine’s Day to discuss the post-war future of the Arab world.

She then shipped off to the Pacific for the eventual conquest of Imperial Japan.

Like the St. Paul, the Pasadena served only later in the war and spent much of its time around the Japanese home islands. She helped lead the invasion of Okinawa, the largest land battle of the Pacific War, and later attacked targets in and around Tokyo. The Pasadena was decommissioned in 1950 and scrapped in 1972.

Named for Springfield, Illinois, one of her first duties was to escort her Quincy sister ship the USS Quincy as she ferried President Roosevelt from the United States to the Yalta Conference. The Springfield then steamed for the Panama Canal and the Pacific Ocean, where among other things she participated in the invasion of Okinawa and attacks on the Japanese homeland.

The Springfield returned to the Fore River Shipyard in 1957, where she was converted into a guided missile cruiser. She later enjoyed global travels as a sort of ambassador of the U.S. Navy, landing at ports of call all around the world, while hosting conferences for President Nixon in the early 1970s. She was decommissioned in 1974.

Serving only late in the war, the St. Paul spent most of her service in and around the Japanese home islands and entered Tokyo Bay with the American fleet on Sept. 1, in preparation for the surrender ceremonies the following day.

She later served in the Korean War and even enjoyed starring role in Hollywood, with extensive screen time in the John Wayne 1965 World War II epic “In Harm’s Way.”