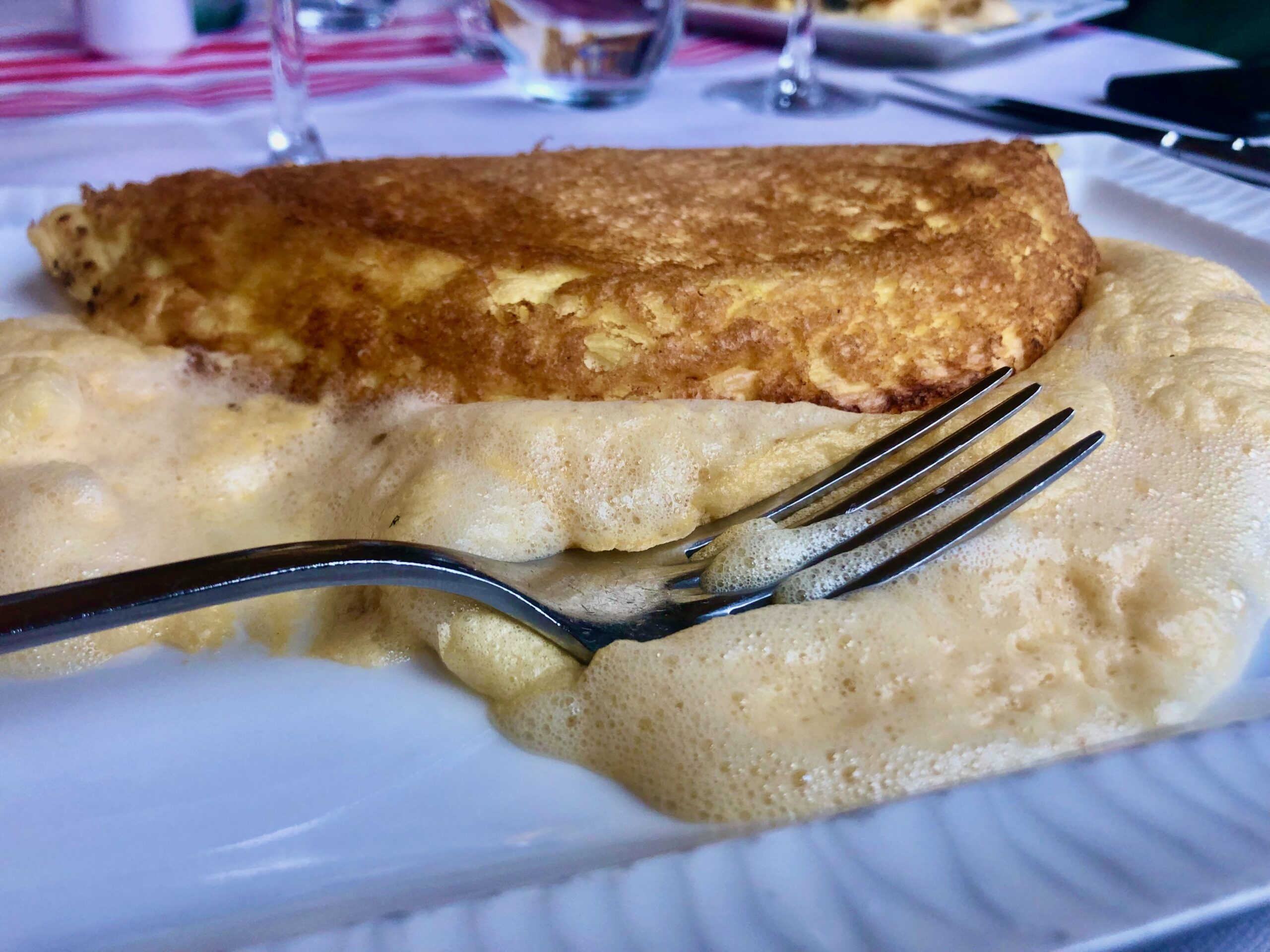 La Mere Poulard on Mont Saint-Michel in Normandy, France serves the world's most famous omelet, a buttery and rare combination of both fluffy and runny.

Mont Saint-Michel is one of those amazing what I call “Harry Potter Towns” that dot the landscape of Normandy.

These are the towns like Rouen, Bayeux and Mont Saint-Michel, among others, that look like they belong in a fantasy scene right out of Harry Potter. Gothic cathedrals. Towering castles. Cobblestoned footpaths. Town squares from the Middle Ages. Kids flying around on broomsticks playing quidditch

OK, I made up the last part.

But the island cathedral of Mont Saint-Michel is the ultimate Harry Potter Town and everything it’s cracked up to be – a stunning piece of architecture and human achievement that climbs out of a little rocky island off the coast of France. It’s hard to believe it even exists.

Mont Saint-Michel is, among other things, where food lovers will find the world’s most famous omelet, at a really cool little restaurant and hotel at the very base of the island called La Mere Poulard (the mother chicken).

Omelets here are unlike any other you’ll find in America, or even in France for that matter.

There is nothing in the omelet but eggs and TONS of butter. They scoop up the butter with a huge spoon and mix it into the eggs. The omelets are then cooked in large steel pans over and open wood fire. I don’t think I’ve ever had an omelet baked over an open fire anywhere else.

Also, the omelets are huge. Like the size of your face. If you have a huge face. And they’re an odd combination of airy and fluffy, but also runny. The average American will find the omelets undercooked. But that’s how you get them.

The omelets are La Mere Poulard come with a variety of different sides. When we were there, your options were vegetables, smoked salmon or potatoes and bacon. Not American bacon. But more like shavings of cured charcuterie.

I naturally went with the potatoes and bacon. Between the three in our group, we got all three different options. All three were awesome.

Finally, omelets here at La Mere Poulard are not for breakfast. Instead, you get them only for lunch and dinner. It’s actually better to go for dinner.

Here’s why: the island is PACKED with tourists in the middle of the day. But most clear out before dinner to head back to the mainland. There are very few hotel rooms on the island – it has only 50 permanent residents – so few people are on the island come dinner time. So you don’t have to fight the crowds at dinner.

As La Mere Poulard doubles as a hotel, you can stay right there above the restaurant. We had a gorgeous suite looking back over the causeway toward the mainland. It was a windy, spitting rain, cold, kind of night tucked up into the fortress of Mont Saint-Michel. It felt almost medieval.

We opened the windows and took in the weather and the scene. It felt almost medieval – which only made it all the more awesome.

Visit Mont Saint-Michel. Get the omelet!