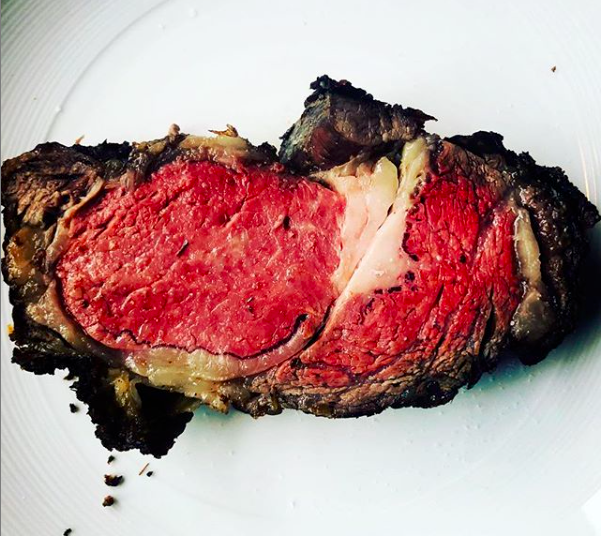 A ton of cheap eats in 2018 yielded a delicious array of American road food mixed with the occasional European classic. Here’s one man’s year in food.

34. Gas station chopped beef brisket (Cole’s Bar-B-Q, Fairfield, Texas) – Mexican ladies were chopping up huge slabs of brisket right there inside a Shell gas station. In keeping with the spirit of my 2018 food year, I ate the brisket in a Wal-Mart parking lot later that day.

33. Iron City Beer and plastic cup shot of Jack Daniels as Red Sox won World Series (Lefty’s, Pittsburgh) – I also played “Dirty Water” on the jukebox as the Sox celebrated on the field. They LOVE me in Pittsburgh.

32. Legit absinthe with sugar cube (Le Comptoir, Paris) – absinthe is traditionally served with a sugar cube on a slotted spoon. You pour water over the sugar cube and it melts into the booze.

28. Moule frites on the Rue de Boucher (Chez Leon, Brussels) – Nothing better than mussels in Brussels! Chez Leon is a landmark on the city’s famous “Butcher’s Street.”

23. Homemade sausage with fresh-baked Italian bread and hot peppers (Santarpio’s, East Boston, Mass.) – As simple as can be. You can see the guy carving up the pig for the sausage in the back room. They bake the bread in house, too. A true Boston classic.

22. Beef brisket with jalapeno cheddar sausage and collard greens (Pecan Lodge, Dallas) – One of the hottest barbecue joints in America. Worth the hour wait. Great local craft beer, too.

21. Shit on a shingle (Mill Dam Corner Grille, Hebron, Ohio) – Chipped beef with creamy gravy on toast. Known to generations of American soldiers as shit on a shingle.

20. Fletcher’s Original State Fair Corny Dog (Texas State Fair, Dallas) – Fletcher’s claims to have invented the corn dog. Eating one in the shadows of Big Tex after the Texas-Oklahoma game is about as Texas as it gets.

18. Taittinger champagne in Champagne (Taittinger Winery, Reims, France) – toured the ancient Roman chalk caves beneath the streets of Reims in which much of the world’s champagne ages to perfection; then enjoyed this gorgeous sparkler.

14. Hillbilly jerky (Hungarian Smokehouse, Cumberland Township, Penn.) – This butcher offered like 20 different kinds of jerky and a had a sign out front declaring that “guns are welcome on premises.” Gotta love small-town USA!

5. Biscuits & gravy (Bob Evans, Wheeling, West Virginia) – My truck should have a bumper sticker on it that says “I brake for Bob Evans biscuits & gravy.”

2. Montreal smoked meatRueben (Reuben’s Deli and Steakhouse, Montreal) – The people of Montreal took corned beef and made it even better.

A tribute to an American culinary icon, the late, great Alumni Cafe