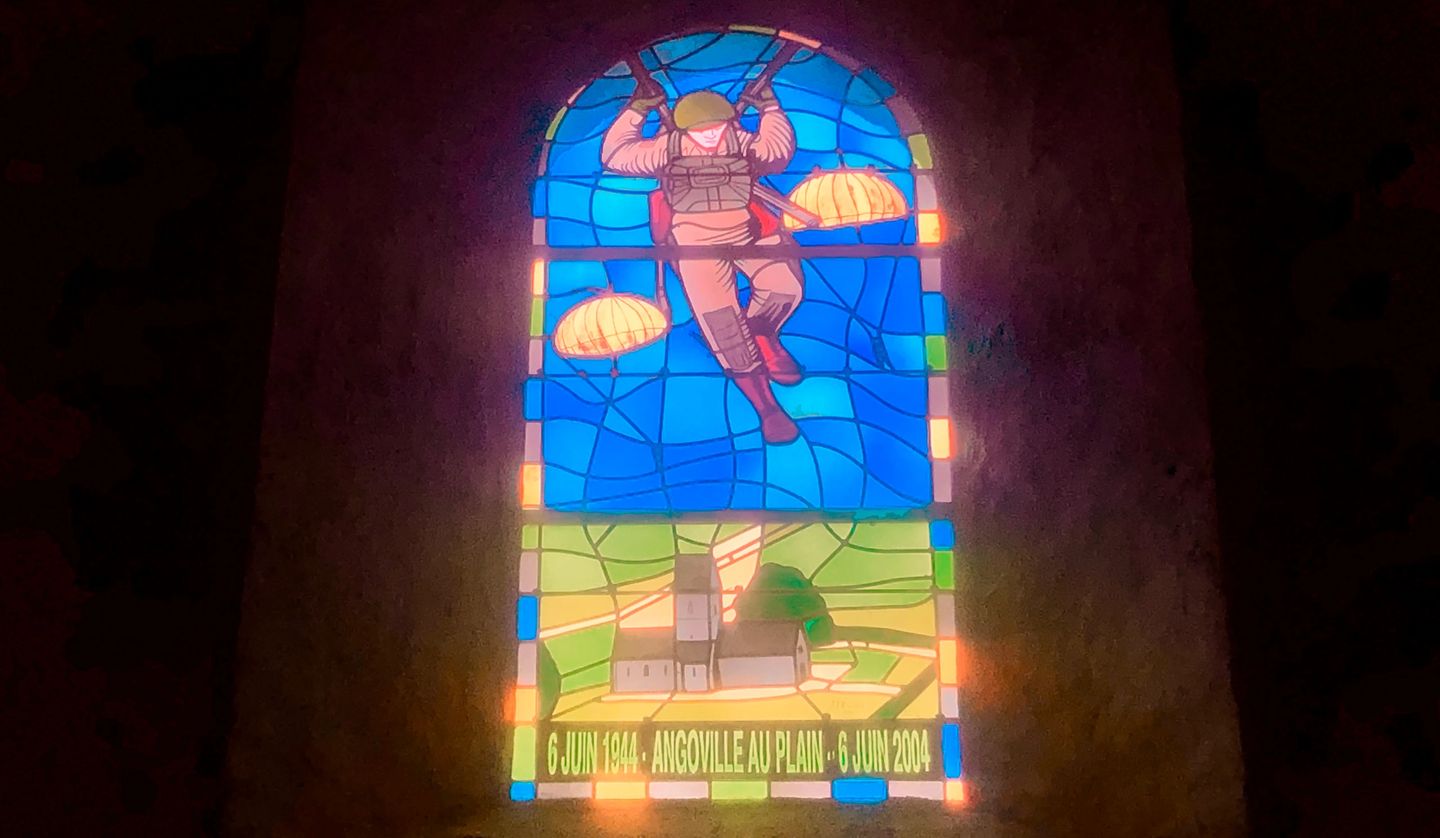 Stained glass in Christian churches are usually reserved for images of Jesus, Mary, Joseph and the saints.

In churches across Normandy, stained glass images of Jesus have been replaced with those of some other saviors: the American paratroopers who heroically dropped into the remote Normandy countryside on D-Day, June 6, 1944, leading the liberation of enslaved Europe. Perhaps the most heroic venture in the annals of mankind.

Those who foolishly believe that the French don’t like Americans need look no further than these beautiful stained glass works of art to learn the truth.

The French love Americans and respect the sacrifices of the Greatest Generation. The government of France goes to great lengths year after year to honor American veterans. So, too, do the people of France.

Their heartfelt personal tributes are especially notable in Normandy, passed down now across three and even four generations. So much respect that people around Normandy honor American GIs so beautifully in many different ways.

You might see a red, white and blue flower bed in front of a home, arranged in the shape of an American flag, or a poetic ode to American GIs scripted on the side of a farmhouse. And then there is the stained glass immortality in their local houses of worship.

Here are a couple of other stained glass windows that feature American paratroopers.

This piece here in the village of Sainte Mere Eglise, the first French town liberated on D-Day and still a center of D-Day celebrations today, is one of the most powerful you’ll find. There are a three paratroopers in the foreground. But if you look closely, you’ll see dozens of parachutes in the background falling to the ground, as Mother Mary and the baby Jesus protect them from above.

Another window in Sainte Mere Eglise, this one below saying at the bottom in French “Ils sont revenus” — also in English, “they have returned.” This piece celebrates the return of American veteran paratroopers on June 6, 1969 for the 25th anniversary of D-Day.

You can see numerous parachutes in the background, as well as the AA symbol of the 82nd Airborne Division. It specifically honors the 82nd’s 505th Parachute Infantry Regiment.

Another piece in the tiny village of Angoville au Plain, this one complete with two great symbols of America: the bald eagle and the Statue of Liberty. And, of course, the parachutes of the liberators that fell in the very early hours of D-Day, several hours before the landings on the beaches.

You can see at the bottom of this narrow window the names of Robert Wright and Kenneth Moore. They were American paratrooper medics who jumped into Normandy on D-Day and turned the tiny church of Angoville au Plain into an impromptu aid station. A mini-hospital of the wounded and dying. They aided and saved many American GIs, cared for German soldiers too, and even some wounded French girls.

There are still blood stains on the wooden pews of the church today.

You’ll see in this window, up the left and right side, the red crosses that symbolize the efforts of Wright and Moore to provide care for the wounded. The two paratroopers are still memorialized 75 years later with many other moving tributes scattered around the village. Wright is such a celebrated local figure in Normandy that he was buried, or at least a portion of his cremated remains were buried, in the church graveyard after he passed in 2014.

The memorial to this Ohio native features an American flag, a flag from The Ohio State University, coins from around the world, a couple bottles of hot sauce (go figure!) and small wooden crosses with buddy poppies, typically a British tradition more than an American tradition. So I assume some Brits left those crosses.

Some English schoolchildren and their teachers left this memorial to Moore and Wright, these brave young American paratroopers 75 years after their heroic jump into Normandy.

The people of Europe still remember America’s GIs. Especially the French. The stained glass windows of Normandy say it all.