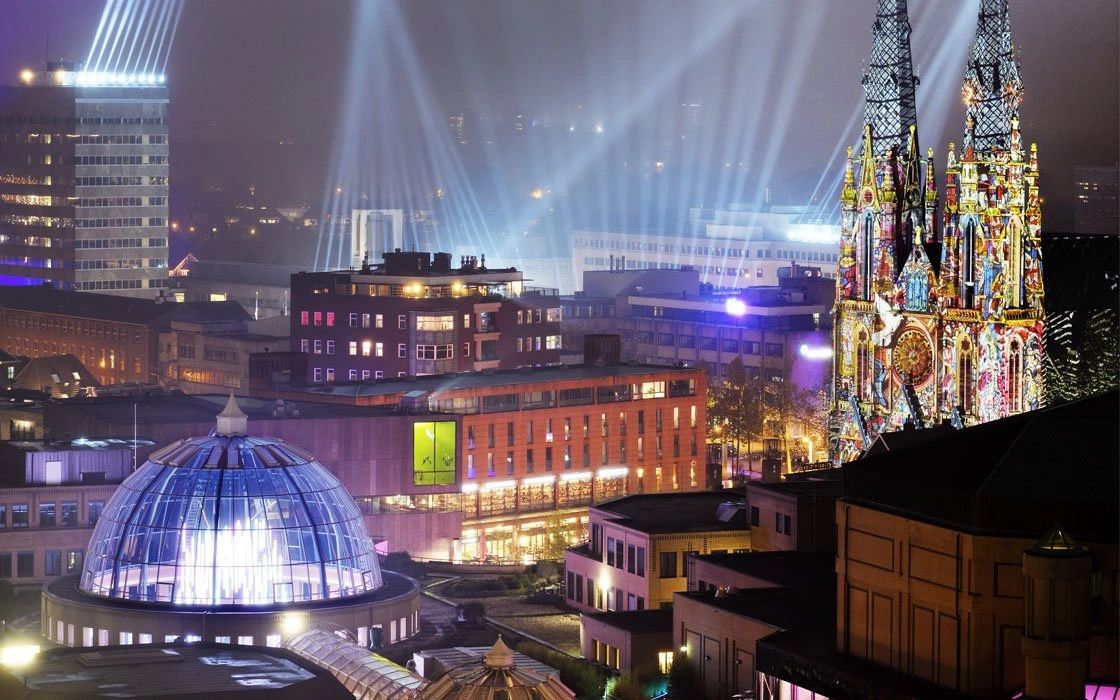 Some of the best stops in the traveling life are those you don’t expect to make.

Consider the case of Eindhoven. It’s a bustling little city of some 230,000 people in the North Brabant province of the southern Netherlands.

Eindhoven wasn’t on our agenda during a recent frenetic European trip: 12 cities in 13 days. We stayed there on a whim simply because we were tired of driving and it was the nearest big city and also because, of course, there was a “Band of Brothers” connection.

Loved Eindhoven! Such a cool place.

Eindhoven is the traditional home of Philips electronics, one of Europe’s first light bulb producers in the 19th century and now a major international technology conglomerate. That energetic spirt of innovation organically pervades the town. You sense it right away.

Even the city’s logo, introduced a few years back, tries to capture that spirit with waves of electricity placed next to the name. You see it all over town.

My favorite spot was a really great shop called Coffeelab right next to the train station. I’ve spent a life pursuing great coffee, from coffee farms in Kauai to the Starbucks roasting plant outside Seattle to world-class cafes in Europe and Asia.

Coffeelab was the first place where I saw the seemingly random combination of ginger ale and espresso. It was fucking awesome!

The hot spice of the ginger ale mixed with the rich bitterness of the espresso made for a combustible explosion of flavors. The presentation was great, too: cute little bottle of ginger ale with a glass of ice, a nice coffee cup, a small cube of brown sugar and the espresso served in a lab beaker, all of it placed on a little wooden board.

The lab beaker was dead-on-brand for both Coffeelab and the city of Eindhoven. Coffee as science. That’s some smart marketing. And a perfect little moment for an espresso junkie.

Our first stop the night we arrived was actually Stadsbrowerij Eindhoven, a great totally American-style craft beer brewery and tap room right on the riverbank.

Even the brewery embraced the city’s energetic history, with its “Watt” and “Volt” series of beers and the same electric symbolism.

A lot of other stuff to see, too.

The Bottle Distillery is in a little alleyway around the corner from the brewery and was voted the best distillery in the Netherlands in 2017.

The same alley houses a little restaurant with these handmade sort of road signs out front that list famous rock lyrics. Hendrix. The Eagles. Old-school American country singer Charlie Rich. And more. Totally awesome vibe! (Not sure those signs are still there.)

Lot of other great stuff in Eindhoven: the majestic twin spires of St. Catherine’s Cathedral, a fun little pedestrian downtown filled with bars and cafes, tons of museums and a really deep bike culture. In fact, there was a rush-hour traffic jam of bicycles the morning we were there!

The Dutch love their bicycles. Its table-flat Low Country landscape makes the Netherlands ideal for bicycle travel. And there were more bikes than cars on the streets of Eindhoven.

And of course, as I mentioned, Eindhoven has a legit “Band of Brothers” connection.

Easy Company and the 101st Airborne liberated Eindhoven in September 1944 during Operation Market Garden, only to give up the city later as the British-led effort to secure the bridges over the Rhine River failed.

The liberation of Eindhoven is one of the many powerful scenes in BofB. The GIs marching through the center of town as the local citizens celebrate their deliverance by waving Dutch orange flags, singing in the streets and mobbing and kissing the troops. You felt the total ecstasy of liberation the U.S. and our Allies brought to Western Europe in 1944 and ’45.

Then we see the dark side of the liberation as the women who slept with the Germans are publicly humiliated, stripped of their clothes and their heads shaved. And a lot worse in most cases. A lot of pent up anger of occupation was unleashed in the wake of the liberation of many European cities near the end of World War II. And Eindhoven was one of those cities.

The Allies devoted a lot of resources to squashing the revenge and the anger that would have made the terrible human atrocity of World War II even worse. A very Lincolnian part of the war effort that goes largely unappreciated.

“Malice toward none and charity toward all,” to quote the Great Emancipator during his famous and beautiful second inaugural address just weeks before his assassination. That spirit, unique to America in the history of warfare, guided our effort to rebuild Europe and Asia in the wake of the war. The people of the United States re-built former enemies Japan and Germany with the same generosity they did our Allies in places like Holland.

You see that spirit still today in cities like Eindhoven.

I captured this photo of downtown Eindhoven with the cathedral in the background from the same angle as it appeared in the liberation scene of Band of Brothers.

Pretty cool to walk in the footsteps of the great heroes of the 101st Airborne.

But even better to see what their unselfish devotion to bettering mankind left in their wake today, 75 years later: a prosperous, energetic old European city with a bright global future.

Behold the world’s No. 1 greatest beer (hint: it’s from Bavaria!)